The most well-known painting of ‘Doubting’ Thomas and his encounter with the Risen Jesus may be the one by Caravaggio. And yet, paintings like his are misleading, as is referring to Thomas as ‘the doubter.’ Why? Because paintings and labels like these lead us to overlook or misperceive some very important details within John’s Gospel story. Rembrandt’s painting of the event (above) helps us notice the difference.

As John tells it, we first find ten of the disciples hiding behind locked doors out of fear. Consider how, during Jesus’ ministry with them, he had more than once told them to fear not. And at the Last Supper, he had given them ‘his peace.’ Yet, rather than remember what Jesus had shared with them, as well as his miracles, all of them have succumbed to fear. Even though Mary Magdalene that morning had already told them that she had seen the Lord. How can these details be squared with any other description than that the ten behind locked doors are doubting, as well?

Second, observe how John’s Gospel describes Jesus’ initial appearance to the ten, when he finds them fearful and doubting. At first, they do not recognize him. It is only after Jesus shows them his hands and his side that they then recognize him, and rejoice at his presence. When they see him, then they believe, and not before. So, once again, Jesus leaves them with his peace. And now, he gives them his Spirit.

Notice what the ten say to Thomas when he then arrives: “We have seen the Lord” ~ the very same witness Mary had earlier offered to them without having had much effect. Thomas naturally replies by saying something like this: ‘Look, I haven’t see him, like you guys just did— and so, just like you, I won’t be able to believe until I see him, either.” Thomas’ statement to them therefore does not need to be heard as him setting the conditions for his belief. It may simply be a practical prediction of fact.

We need to be equally perceptive about John’s description of Jesus’ later visit to that same locked room. It is a week later when Jesus returns to the eleven, among whom Thomas is present. It is vital to notice what Jesus says to Thomas. It’s even more important to observe how John describes Thomas’ response. Jesus invites Thomas to touch him and to believe. But the Gospel does not say that Thomas has any physical contact with Jesus. It does not tell us that he reaches out, or that he makes an effort to touch Jesus. Instead, and just as Jesus gives him credit for doing, he sees, and then he believes. Just like the prior experience of the other ten!

Rembrandt’s image, like the painting by Carl Bloch, is faithful both to what John tells us, and to what he does not. Observing this, we should refer to this story in John’s Gospel in a different way ~ ‘the doubting disciples, and how they all came to believe.’ 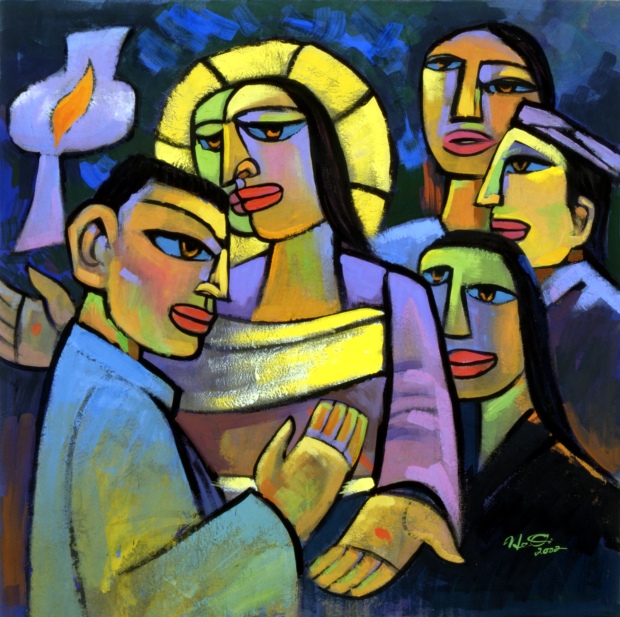 I love how artists help us read and hear Scripture in new ways. Occasionally, they help us perceive aspects of biblical texts for the first time. Paradoxically, in one case artworks have nurtured a mis-hearing of the Gospel. For all the paintings of Thomas that I know refer to him as having doubt, and portray the resolve of that doubt as coming from his touching the side or hands of the risen Jesus. But look closely at John’s Gospel. In his visit to the room where the disciples have been hiding, the risen Jesus does not directly attribute ‘doubt’ to Thomas. Instead, and perhaps with his prior visit to the other disciples in mind, he merely tells Thomas not to doubt. Nor does John describe Thomas as taking up Jesus’ invitation to touch him. Jesus credits Thomas for believing after seeing him, rather than after touching him. He then encourages the kind of belief that does not rest upon seeing.

Notice how the other ten disciples are hiding in fear, rather than joyfully confident, when Jesus comes to where they have locked themselves in. They are described as rejoicing only after Jesus shows them his hands and his side. In other words, Thomas is not unique and different from the other disciples, and benefits from exactly the same experience that transformed them from people fearfully hiding into those who are rejoicing. Their joyful confidence is reflected in their words to Thomas when he later arrives. They say, “We have seen the Lord.” Their joy is the direct result of seeing Jesus’ hands and side, the very things Thomas says will be key to his own believing. So, the ten did not believe until they saw; and Thomas will not believe until he sees. What they received, he, too, will receive. As will we, who—like Thomas—were not initially in that room. The history of art obscures this important point.

James He Qi, The Doubt of St. Thomas (He Qi © 2014 All Rights Reserved); used with permission. I think of it as portraying the community faith of Thomas. See John 20:19-31, and 1 John 1:1-2:2. Click here for a link to my Sunday homily, which explores the impact of the resurrection upon the disciples.