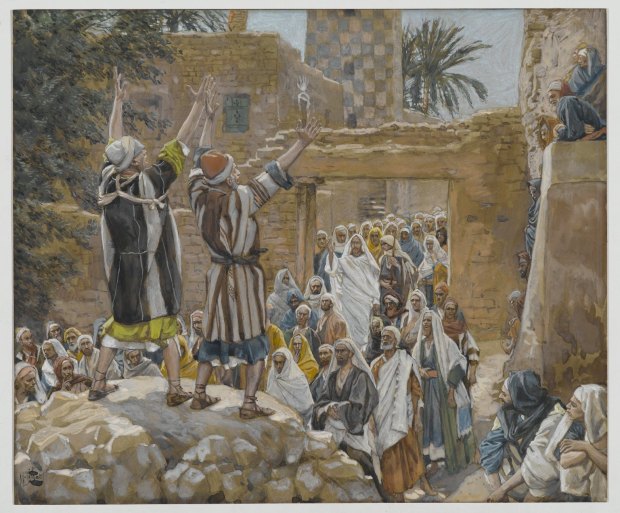 Here we see James Tissot’s marvelous painting of a Gospel scene, which portrays Matthew’s telling of the story. Matthew mentions two blind men calling out to Jesus. Yet, Mark chooses to focus on just one of them, whom he names as Bartimaeus. But the scene largely remains the same in both Gospels. Jesus and his followers are in Jericho, on their way up to Jerusalem. They are approaching his triumphal entry into the Holy City on what we now call Palm Sunday.

I like to think of the man on the right, in this painting, as Bartimaeus, who –as Mark suggests– lost his sight at an earlier point in his life. Tissot depicts the other man’s eyes as covered, in the way that some sight-impaired people wear sunglasses. Perhaps that other man had been blind from birth. If so, He provides a contrast to Bartimaeus. Noticing this may help us appreciate the symbolic dimension of blindness and sight at the center of Mark’s Gospel. And it will help us attend to his deeper meaning. For Bartimaeus had sight earlier in life and then lost it. Now, when encountering Jesus, his ability to see is restored.

Let’s recall how, in the immediately prior story in Mark, James and John act pridefully when approaching Jesus. Do you remember the question Jesus asked them? He asked James and John, “What do you want me to do for you?”

It’s no coincidence then, that Mark, in his follow-on story, records what Jesus asks blind Bartimaeus. It’s the same question: “what do you want me to do for you?” As Mark presents the two successive and paired stories, I wonder if we perceive the parallel between them. First, we hear James and John blindly ask Jesus to share in his glory. When answering the two spiritually-unseeing disciples, Jesus provides a forceful correction, if not also a rebuke. Then, in the following story, when Bartimaeus perceptively asks for the recovery of his sight, Jesus responds mercifully to the physically blind man.

This tells us something rather important. For if we talk to our Lord at all, like the disciples we probably make requests of him. And, what we ask Jesus to do may, or may not, be in accord with his will for us; and it may not fit with God’s plans for us. James and John asked for something that diminished their experience of participating in God’s Kingdom. Whereas Bartimaeus asked for something that opened up the fullness of the Kingdom. And, it made him “well.”

We can then draw out the implications of this contrast. Because Jesus is not just ‘the answer to all our questions.’ Jesus also acts as ‘the question who prompts our best answers.’

In other words, Jesus asks us the same question: What do you want me to do for you? This could be his most challenging question to us as the people of God, and not just to us as individuals! So then, if we could ask him for only one thing, what would it be?