I have long admired Henry Moore’s sculptures. Through his willingness to explore various ways of representing the human form, as well as his less representational considerations of abstract shapes, Moore has left a huge legacy. His exploration of aspects of the human body is compelling. I especially like an example that can perhaps be described as a hybrid between those works and his interest in more abstract contours. I am referring to his Three Piece No. 3: Vertebrae, shown above. I first came to see and interact with this sculpture while in college, when visiting a scaled up larger version of it on the Safeco Plaza in Seattle (depicted below). 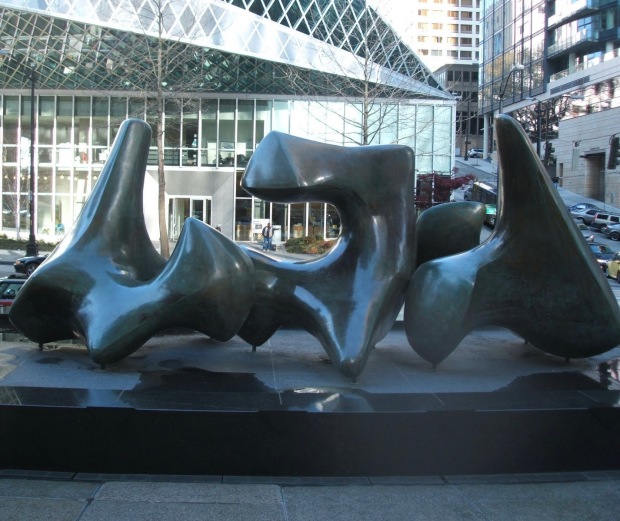 Moore’s Three Piece No. 3 involves a sculptural adaptation of a basic element of both human and animal anatomy, spinal vertebrae. It clearly suggests its biological source while also providing a dynamic interplay between three objects inspired by the same bones.

The top photo above is of the bronze casting of the preliminary plaster model for the sculpture, with roughly the dimensions of 3′ x 8′ x 4′. It is evocative in that scale, where we find it sitting on a plinth for viewers in a gallery. Moore, in the following year, then created a significantly larger version of the same, measuring roughly 9′ x 24′ x 10.5′, of which the Seattle plaza installation is an example. About ten years later, in 1978, the sculptor was commissioned to scale up the work for an even larger placement in the City Center Park Plaza outside the Dallas City Hall. The photos below depict the artist’s own copy of the the Seattle version of the work, as seen in the rather different setting of the Henry Moore Foundation Studio and Gardens, in Hertfordshire, England.

There is something compelling about Moore’s discernment regarding shape, form, and the dynamic interplay that we can see among otherwise static masses of beautifully aged bronze. These are not arbitrary shapes, and I think something within us recognizes the intrinsic connection between these abstract-looking forms and our own physical embodiment. Why do we find such sculptural elements attractive and compelling? Possible answers to this question might lead to a book length response. But I think we can say this: with sculptures like his Vertebrae, as well as with his representational exploration of the overall human form, Moore has shared with us recognizable instantiations of physical beauty with which we have a real connection, and one that is spiritual as well as aesthetic.

For when we recognize beauty in art, and or in nature, we recognize our disposition toward finding beauty. In finding beauty, we are able to discern something profound about ourselves as well as about the imprint within us of the love of our Creator, who is found within all beauty.