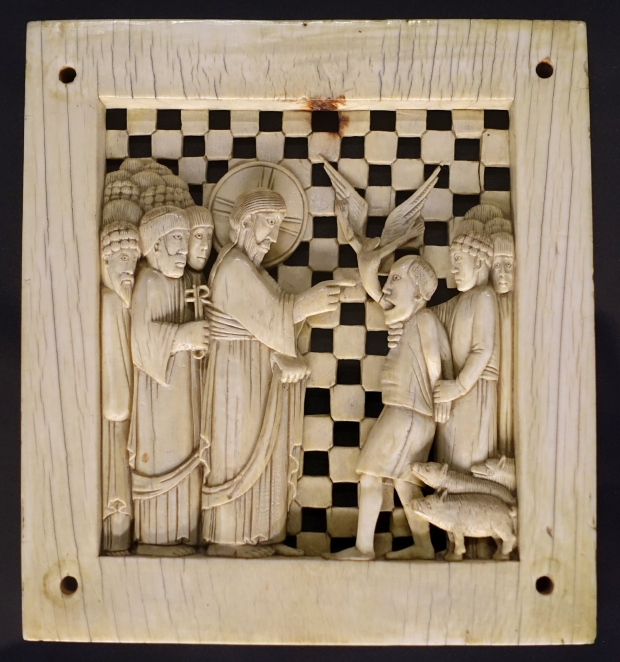 Deliberately, Jesus goes into a region where Gentile’s live. To the people of Israel, pagan societies like those of Greece and Rome signified a culture of death rather than one of life. We should not be surprised, then, that Jesus encounters a demon-possessed man who dwells among the tombs of a cemetery. Quite aside from the demons inhabiting him, the possessed man is unclean from living in a place for the dead. So then, is it merely a small detail or a coincidence that the the demons are called “Legion?” For this name refers to a cohort of pagan Roman soldiers! Or that, after they are released from the possessed man, the demons enter into what for Jews are the ritually unclean and forbidden swine?

In the image above, we see one of the beautiful Magdeburg Ivories. Jesus is commanding the demon to come out of the man who is held by friends, with the swine at his feet. The expelled demon looks like the fallen angel that it is, emerging from the possessed man’s mouth.

Notice how Jesus, in Luke as well as in this image, engages the possessed man directly. He shows no concern for his own safety, or his spiritual defilement from contact with a demon-possessed Gentile. Luke describes how the demons defer to Jesus and his implicit authority. They beg him to spare them from a return to the abyss, the realm of the dead symbolized by the depths of the sea. Jesus might have responded by ordering the demons to simply leave the man. They would then have remained among the tombs as a continuing danger to the nearby Gentile city. Yet, he permits them to leave the possessed man and enter a herd of pigs, which immediately rush down the hillside ~ ironically, right into the dreaded sea!

Surprisingly, Jesus responds positively when the unclean demons twice beg him for something. And yet, when the newly-healed man begs to stay with him, Jesus responds negatively! This helps us discern one of Luke’s main themes. When Jesus tells the healed-man to return home instead of following him, Jesus also instructs the man to declare to others how much God has done for him. Obediently, the man goes back to his Gentile community. Not surprisingly, he proclaims how much Jesus has done for him. God’s kingdom power continues to be manifest in the mission and ministry of Jesus.

I have been an Episcopal priest for thirty five years, having served in parishes and in academia. My interests include art and theology, liturgy and spirituality, and I love to go sailing whenever I can.