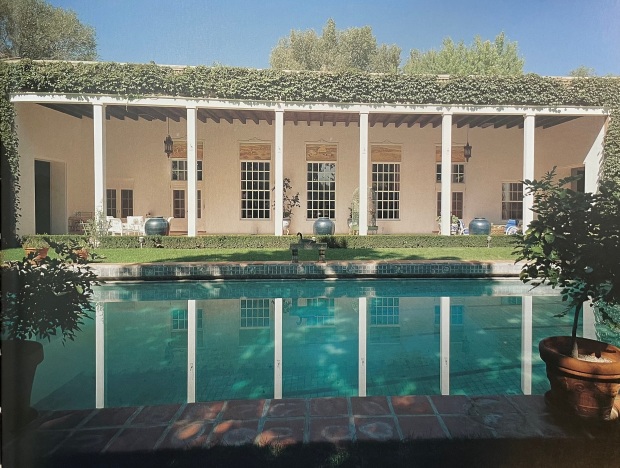 John Gaw Meem’s appreciation for and promotion of the Spanish Pueblo Revival approach to architectural design is closely associated with what many call the Santa Fe Style. Yet, as early as the late 1920’s, Meem is also credited with initiating another style, Territorial Revival, which also became prevalent in the city and region. While continuing to use wall surfaces and color tones suggestive of adobe, Meem and his associates began to introduce into their building designs some Greek Revival features that date back to the late 18th and 19th centuries. As we see in the photos of La Quinta, above, among these features are a return to an evident employment of symmetry, the specification for lintels above windows and doorways, and often with triangular pediments. Also, instead of untreated wood or dark stained columns we find Meem choosing whitewashed uprights matching a similar choice for window trim as well as for the doors.

A good example of Meem’s transition to this Territorial Revival style can be seen in the details of the porch area of  the 1928 Conkey Residence (below). Though painted a teal color, the windows have received their triangular pediments, and we see ornamental detailing on the shutters as well is in the scrollwork forming a porch rail. These features, as well as those noted above, characterize a move away from his more imitative Pueblo style and indicate a preference, likely influenced by some clients, to incorporate architectural elements suggesting an increased formality and an evident dialogue with earlier and classically inspired design.

Meem’s approach to architecture, with both his Spanish Pueblo Revival and his Territorial Revival styles, might suggest an anti-modernist rejection of contemporary European inspired design principles in favor of an adherence to an evident regionalism. Yet, Meem contended that his architectural work effectively blended aspects of modern architecture with a sensitivity to both local history and contextually appropriate materials. Even when working with concrete for the Colorado Springs Art Center, perhaps his most International School-looking building (which evokes European modernism / featured in a prior post), Meem sought out a formula for the poured mix that would render the color of the walls a warm cream tone instead of a cool gray.

Meem’s Santa Fe County Courthouse (depicted above) reflects an interesting hybrid between the Spanish Pueblo Revival and the emerging Territorial Revival styles. There are marked outward similarities between this structure and his earlier pueblo style buildings and yet also some rather divergent details. This view of the building’s courtyard entrance (recently restored) reflects a creative blend of influences, including historic pueblo buildings, a Spanish design sensibility, and yet also a nod to modernism, most evident in the massing of structural forms as well as in the turquoise clad windows punctuating the walls of the side wings.