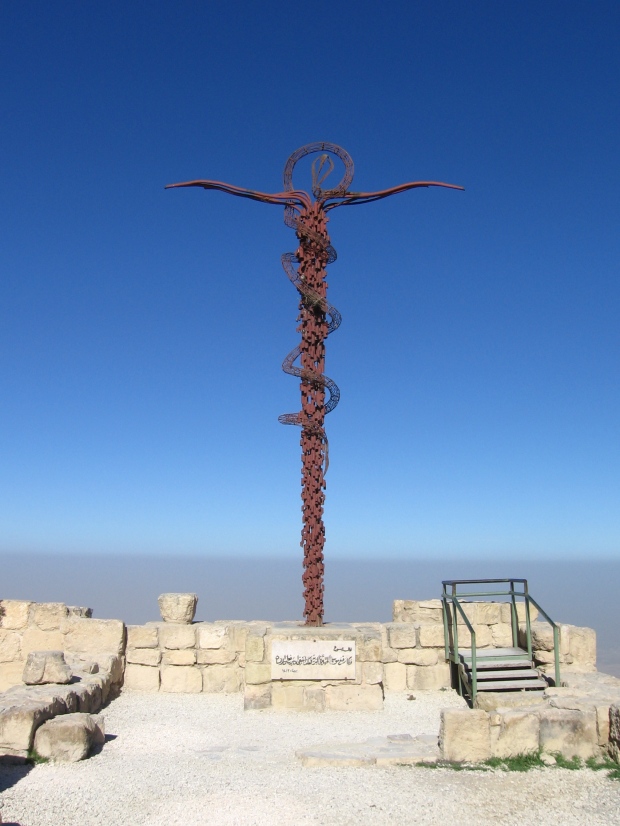 At the summit of Mt. Nebo, in Jordan, there is a tall sculpture that commemorates the Bronze Serpent. This is the serpent mentioned in the book of Numbers, in a story about Israel’s wilderness wanderings.

The metal sculpture, by Giovanni Fantoni, features a serpent twisted around a pole. Its head, depicted at the top, is encircled by a loop of its body. The fact that the serpent story occurred at a different place in the wilderness raises the question of why this sculpture is positioned on Mt. Nebo. That location suggests one reason. From the lookout next to the sculpture, people can see Jerusalem on a clear day. The view to the west includes Jericho and other sites in Israel.

Perhaps you have noticed African-American churches named after Mt. Nebo. From it, Moses was allowed to see the Promised Land before he died, without ever getting there. Mt. Nebo, and seeing the Promised Land, have become metaphors for the promise of deliverance and salvation. In recent history, this theme powerfully shaped Martin Luther Kings’ last sermon, on the night before he was assassinated in Memphis. See the film of it, or read his words. They are stirring.

From the biblical story we learn one reason why the serpent became metaphor for healing and deliverance. When Moses fashioned the bronze serpent, the repulsive sight of a snake in the wilderness was transformed, so that it became a symbol of his peoples’ reconciliation with God.

Here, we see how the sculptor was thinking of more than the biting serpents. Clearly, he was also mindful of Jesus’ words in John 3. In addition to depicting the serpent made by Moses, we see how the looped body of the snake around itself also suggests the head of one who has been crucified. We also notice the lyrically shaped crosspieces, evocative of outstretched arms. The sculpture reminds us of Jesus’ words to Nicodemus, “Just as Moses lifted up the serpent in the wilderness, so must the Son of Man be lifted up…” Speaking figuratively, Jesus risked likening himself and his probable death to the bronze serpent. Seeing him lifted up, repentant hearts recognize the power within this new symbol of redemption.

Think about the Cross. Over time, an object representing a dreadful death has come to symbolize a new and different meaning. Something truly frightening was transformed by God into a symbol representing reconciliation with our fear of death. The Romans used the cross as an instrument of violent subjugation, effectively employing it to suppress the will and spirit of nations under their dominion. Through the centuries, the cross has become a symbol of life, and of love. Seeing the One lifted up, opens to us the promised land of new fellowship with God.

The Bronze Serpent, by Giovanni Fantoni, on Mt. Nebo, in Jordan. See, also, Numbers 21:4-9, and John 3:14-21. For a link to my Sunday homily on this theme, and referencing both the sculpture and M.L. King’s last sermon, please click here.