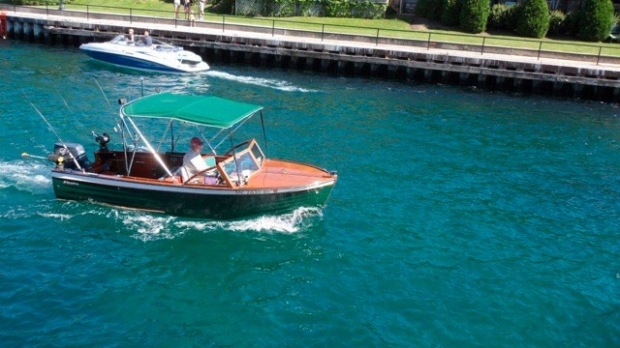 Stuart Levine, About 2010, Heading Out to Fish

For me, getting to know Stuart began with seeing a boat, an old boat. From when I first visited the northern Michigan harbor town of Charlevoix in about 2005, I noticed and was attentive to a classic fishing boat. It was a lapstrake wooden-hulled motor boat from the late 1950’s, painted in a beautiful dark forest green. Yet, I was also attentive to the easy skill and confident style of the boat’s captain, an older man whose approach to open water I admired and wished to emulate. During my increasingly frequent summer visits to Charlevoix, I took note of this boat and its persistent captain, who obviously knew what he was doing when going in and out every day to fish on Lake Michigan. 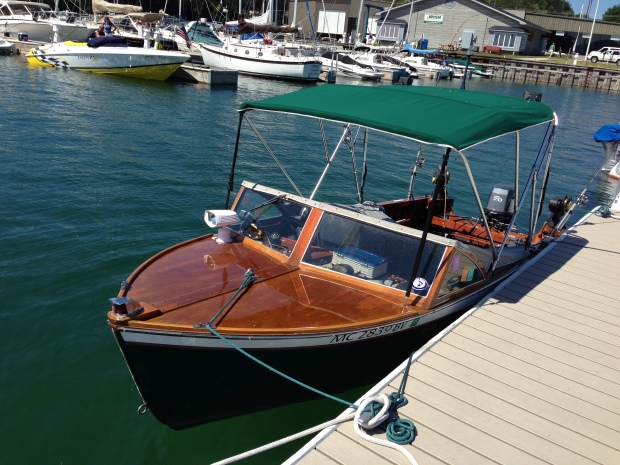 After about seven or eight years of seeing him and his boat each summer, and having taken photographs of them during many of those years, I finally met Stuart. One morning, early in the summer of 2013, I saw that venerable boat in my marina. The next afternoon I saw it again, while her captain was tying her up having come in from another fishing trip. Plucking up my courage, I walked over and haltingly introduced myself. I told him of my admiration for his boat and for what I had inferred from my limited observation about his daily practice. As it turned out, both Stuart and I loved old boats. And, serendipitously, Stuart and I hit it off. We were weekly correspondents, and fellow summer boaters, ever since.

As time has shown me, I had encountered and begun to be acquainted with a person of remarkable ability, sensitivity, and enhanced intuition. From first knowing him, Stuart seemed to look beyond the apparent limitations of the present moment, attend to what might be hoped for, and reflect on how the future could really be different. As I came to see, Stuart’s approach to life was nothing like the proverbial person who ‘sees things through rose-colored lenses.’ Stuart’s optimism was grounded in a belief that a different and more positive future results from actually choosing to live in a different way now, not just from believing or hoping differently.

A great example of this aspect of his character took place one summer. Standing with him on the Charlevoix dock while he was stowing his fishing gear after an outing, I asked about all the fishing tackle and gear he left on the boat, openly visible to anyone who might come by. Stuart told me about a valuable fishing rod that he had once left on the boat in a similar way. Upon discovering the rod’s disappearance the next day, he wrote a letter to the editor of the local newspaper, describing the theft but saying that he would not change his usual trusting practice. He wanted to spend his summers in a community where people modeled trust, rather than self-protective fear.

I am reminded of an episode in a video by the former National Geographic photographer, Dewitt Jones (Celebrate What’s Right With the World). On assignment, Jones visits a living national treasure of the UK, a woman who was an acclaimed weaver up in the northern Hebrides Islands. Jones asks her, what do you think about when you weave. She responds by saying, at first, “I wonder if I will run out of thread!” Jones admits to being surprised by this. But then, she says, “When I weave, I weave…”

Stuart lit up when I told him this story, and he then said, “When I fish, I fish.” He told me that his delight was in the process, more than in the results. His comment then struck me, as it still does, as absolutely authentic to him. Even though this was a man the Michigan DNR highly regarded for having documented every lake trout he had caught and released for decades!

At a marina cookout in 2019, Stuart and I talked about the evolving challenge of evaluating college and graduate students in this current era. With several other boaters attentive to his comments, Stuart talked about his commitment to trusting his students. As always, he spoke positively about how placing trust in others encourages them to live into our imputed and projected hope for them. He often reflected on this principle with me, hoping to commend it. After all, it is founded (among other places) in Aristotle and in the Hebrew Scriptures. For what we practice, and live into, shapes who we are becoming. Stuart exemplified this insight.

And yet, at that cookout, as a younger, less-wise and less-experienced former academic, I responded by describing my disappointing prior service on a national examination board. As he invariably would in such conversations, Stuart challenged my apparently less-than-positive view of such processes. He did this in a way that was shaped by his long life experience of having served as a reflective scholar. By his comments in conversations like this, he would disclose how he was both intellectually curious as well as spiritually sensitive. In this way, he showed how he was often a mentor not only for young intellects but also for older souls.

Stuart reminded me of some my favorite teachers. He did this by how he modeled a particular virtue. It was his disposition to value good questions over what often seem to be important answers. For me, Stuart was an excellent example of one who always encourages others to wonder, and then ask, but, what is the question? For when we come to appreciate the horizon of a beautiful question, we are then more open to discovering meaningful answers to it. Stuart displayed an abiding curiosity about finding good questions. And this led him to discerning an ever-expanding body of insightful answers.

In one other important respect I would like to offer a tribute to Stuart. From time to time he would share with me words of respectful remembrance he had shaped in his effort to honor former colleagues, friends and students. His approach to this sometimes difficult task was compelling. For Stuart embodied a desire to recognize and express appreciation for the gifts, strengths and achievements of others, as a kind of spiritual practice in itself.

I offer this tribute in memory of Professor Dr. Stuart Levine, who died on May 1, 2020. He was formerly a Dean and Professor of Psychology for many years at Bard College, Annandale on the Hudson, New York. Stuart’s cultural and spiritual roots were within Judaism, and Bard College’s early history was associated with The Episcopal Church, within which I was ordained as a deacon and priest.