Renovation and Extension of the La Fonda Hotel, Santa Fe (1927)

John Gaw Meem is generally credited with having led the recovery and promotion of an historically Spanish-Pueblo Revival approach to building design in the central district of Santa Fe, NM, as well as in its environs. Warm tones in beiges and browns adorning the surfaces; soft rounded edges and corners characteristic of adobe buildings; a general preference for asymmetry; slightly upward sloping walls with accompanying exterior buttresses; and protruding beam-ends of the flat roof supporting logs evident also in the interior ceilings; all these and more are features of this recognizable ‘style.’

Yet, speaking of ‘style’ may create a misapphrension. Whereas more recent contractors and builders may imitate some of the above mentioned features in homes now quickly built for mass consumption, John Gaw Meem pursued an informed appreciation for the structural character and integrity of his region’s most important historical buildings. He as diligently applied himself to the practice of historical preservation as he did to his own genuinely creative work, where he typically disciplined his architectural vocabulary so as to remain faithful to the traditional features he so intentionally studied.

Depicted above is the result of his design for a renovation and extension of the historic La Fonda Hotel in Santa Fe, a project that seems to owe as much to the historic Taos Pueblo as it does to modern needs and sensibilities. Set side by side with the above, we can consider Meem’s great achievement with the main library for the University of New Mexico, in Albuquerque, a sizable institution for which Meem designed and / or oversaw the planning of some 25 buildings after being named campus architect in 1933. 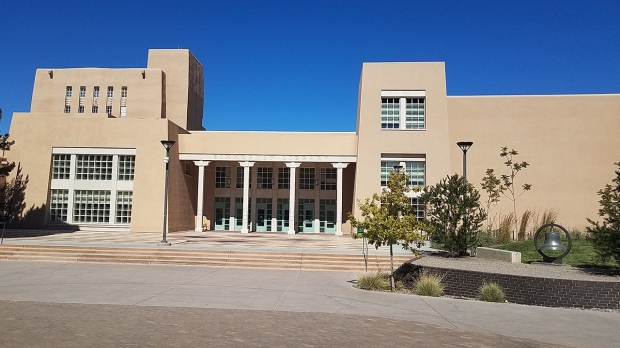 Here we find two distinguished buildings, the La Fonda Hotel extension and the UNM Zimmerman Library, separated by less than a decade in terms of their design and construction, which both exhibit Meem’s sensitive appreciation for the legacy of Spanish-Pueblo architecture, as well as its adoption by the diverse immigrant culture of the Southwest.

Like the writer, Walker Percy, John Gaw Meem came to discern his vocation in the context of receiving care for tuberculosis in a sanitarium. For Percy, it happened in upstate New York, whereas Meem found himself and his guiding vision in Santa Fe. From small beginnings involving private commissions for houses, Meem expanded the range of his work to also include commercial buildings, historically-informed designs for new churches as well as the restoration of historic examples, and structures providing for the functional needs of public eduction that were equally attentive to humane and aesthetic considerations relevant to a learning community.

One of Meem’s highly regarded projects for a public building was his Colorado Springs Fine Arts Center (1934), a building reflecting the European modernist influence of his era as well as echoes of design ideas implicit in his obviously pueblo-adobe inspired buildings. This project clearly demonstrates how Meem’s high regard for historic precedents did not inhibit his ability to work more freely in a contemporary way, adapting chosen materials and design principles to emerging requirements.

Here (below) is a photo of Meem standing on a balcony of the original theatre of the Colorado Springs Fine Arts Center.

In the future, I look forward to offering a post related to some of  Meem’s designs for homes, as well as one featuring his evocative contributions for Santa Fe area church architecture.

Evidence of his influence: the Meem Library at St. John’s College, Santa Fe, by David Perrigo, inspired by and in honor of JG Meem