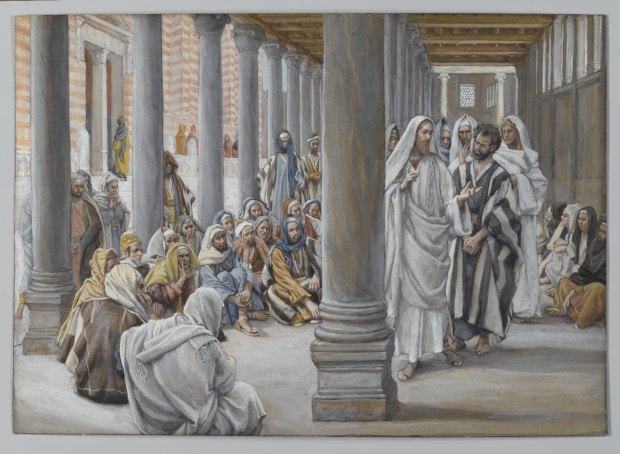 In the Temple’s portico of Solomon, Jesus is challenged concerning his identity, whether he is the Messiah. In response, Jesus points to the works that he does in his Father’s name. Clearly, those who question him neither really hear him, nor see who he is.

John, in the book of Revelation, records a series of visions. “I looked,” he says, “and there was a great multitude that no one could count, from every nation, from all tribes and peoples and languages, standing before the Lamb.” John’s vision of the multitude is not as dramatic as some other images in Revelation. But even this relatively tame scene, recorded in chapter 7, can strike us as fantasy. Most of us never see things like John describes. And, as we say, if I don’t see it, I therefore don’t believe it!

But what if? What if invisible and spiritual things are just as real as what we see and touch? One attribute I appreciate about the photographer, Dewitt Jones, is how he turns conventional wisdom on its head. Instead of limiting belief to what we perceive, he challenges us to believe so that we might see. In his view, perception does not enable belief. Instead, belief enables perception. As a photographer, Dewitt Jones articulates a significant spiritual principle.

We might imagine that, in John’s captivity on the prison island of Patmos, the seer of Revelation had ‘private visions’. Denied the freedom to gather for worship with other believers, God may have given him compensatory visions to sustain him in his solitude. Yet, it seems clear that John was a person of deep faith prior to receiving his visions. And his vision of the multitude should sound familiar to us, especially during Eastertide.

Here are some words many of us pray to our Father in this Easter season: “Fountain of life and source of all goodness, you made all things and fill them with your blessing… Countless throngs of angels stand before you… Joining with them, we sing “Holy, holy, holy…” In this prayer, we are part of the same multitude that John reports having seen in his vision, gathered before the throne of the Lamb. As we join the community he sees, we share their praise and thanksgiving.

Even more to the point, notice what we sing about: “Holy, holy, holy Lord, God of power and might, heaven… and earth… are full of your glory.” I have always loved what those words suggest ~ heaven, and earth, are full of God’s glory! The world is filled with wonder, grace and blessing!

In our Eucharist, we say what we believe. And our believing is then key to our seeing. In the same prayer, we also say, “we acclaim you, holy Lord… Your mighty works reveal your wisdom and love.” In other words, whether we perceive it or not, God’s creative handiwork all around us reveals God’s wisdom and love. Grace inhabits Creation. Because God’s handiwork is revelatory, it’s possible for us to see more than we do now. Not only did the Creator make all things and fill them with divine blessing, God created all things, including us, to rejoice in the splendor of God’s own radiance. When we perceive this blessing within ourselves, in each other, and in all that surrounds us, we then give voice to every creature under heaven, as we offer our gifts of bread and wine.