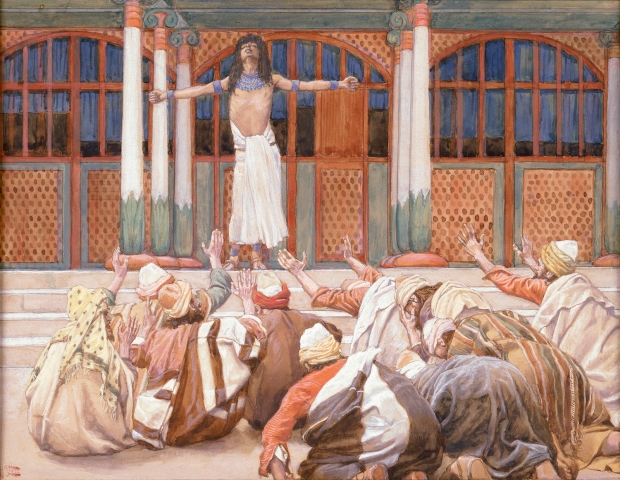 As Joseph speaks to his surprised and dismayed brothers, he tries to overcome their fear and embarrassment. They are focused on the past, on what happened before, and their own role in causing great misfortune to fall upon Joseph’s head. While Joseph is focused on the future, and the purpose and end toward which God is surprisingly pulling things along.

As we notice this difference between what Joseph and his brothers are looking at, we receive an insight. It comes to us from Aristotle, among others, and it concerns how we use the word ’cause.’ Sometimes —maybe even often— we focus only on the starting cause which got some bad things going. When we do, we overlook the greater importance of the result cause, the good end toward which God may be leading us. This is what Joseph wants his brothers to see.

And just as there is no single way to read a biblical story, there is no single way to ‘read’ a painting. This truism applies not only to the Joseph cycle of stories from Genesis. It applies equally to James Tissot’s painting of the moment when Joseph Makes Himself Known to His Brothers. Joseph appears in the finery of an Egyptian prince, just as Moses may later have appeared. At first, his brothers don’t recognize him. Not only because of the context, but also since it has been years since they have seen him.

At the center of the Genesis Joseph-in-Egypt stories, and of Tissot’s painting, is a paradox that lies at the heart of all human life: consciously or not, human beings bring evil upon one another. And so, the question arises ~ where is God in all this? Does God cause, and therefore bring about the trouble that then follows? Or, without necessarily making it happen, didn’t God know all along where things would head, and that they would surely head toward something good? Either way, isn’t God directly involved in the moment by moment way we wrestle with these and other variables? Isn’t God always an overseeing and yet intimate companion, especially as we face serious and highly consequential decisions?

Let’s remember the earlier Genesis story about Joseph’s father, Jacob. And how Jacob was distressed in the wilderness concerning his brother Esau. Jacob wondered whether Esau was potentially once again a friend, or indeed, whether he was still his adversary. Jacob’s wrestling match with God’s angel was all about this question. Likewise, as I wrestle in prayer with big and troubling decisions, I can ask God a similar question: Are you my friend? Or are you also my ‘adversary?’ Either way, if we are looking to blame and assign responsibility, how much are we willing to ascribe to the divine ‘hand’? For God seems to be in control of all that happens. Or, at least, God lets whatever happens, happen. When considering bad events, it is human nature to wonder who caused them, especially with an eye to blame. And, in the process, it is also fallen human nature to overlook the good end toward which bad events might be leading us. For there may also be a good end toward which God is pulling us forward.

I have been an Episcopal priest for thirty eight years, having served in parishes and in academia. My interests include art and theology, liturgy and spirituality, and I love to go sailing whenever I can.