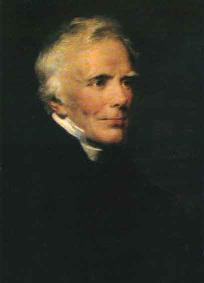 On this day, the anniversary of his death, Anglicans and Episcopalians remember the saintly John Keble, a priest and poet, and theologian (1792-1866). He is associated with what came to be called the “Oxford Movement” and the Catholic Revival in the Anglican Communion. For Keble, this meant something more like high principles rather than what we now call ‘high church,’ for he had little interest in outward things like elaborate liturgy or clerical dress. More important to Keble was a sacramental view of Creation and a regard for the way that God infuses the whole world with grace.

He is also remembered as the author of The Christian Year, a collection of poems written in relation to the Scripture texts appointed in the Prayer Book lectionary for Sundays.

Fragments from two of his poems for the Epiphany season evoke Keble’s regard for God’s generous gifts of grace within and through the natural world around us.

From a poem for The First Sunday after the Epiphany:

Soft as Memnon’s harp at morning,
To the inward ear devout,
Touched by light, with heavenly warning
Your transporting chords ring out.
Every leaf in every nook,
Every wave in every brook,
Chanting with a solemn voice,
Minds us of our better choice.

From a poem for The Fourth Sunday after Epiphany:

When souls of highest birth
Waste their impassioned might on dreams of earth,
He opens Nature’s book,
And on His glorious Gospel bids them look,
Till, by such chords as rule the choirs above,
Their lawless cries are tuned to hymns of perfect love.

I have been an Episcopal priest for thirty five years, having served in parishes and in academia. My interests include art and theology, liturgy and spirituality, and I love to go sailing whenever I can.