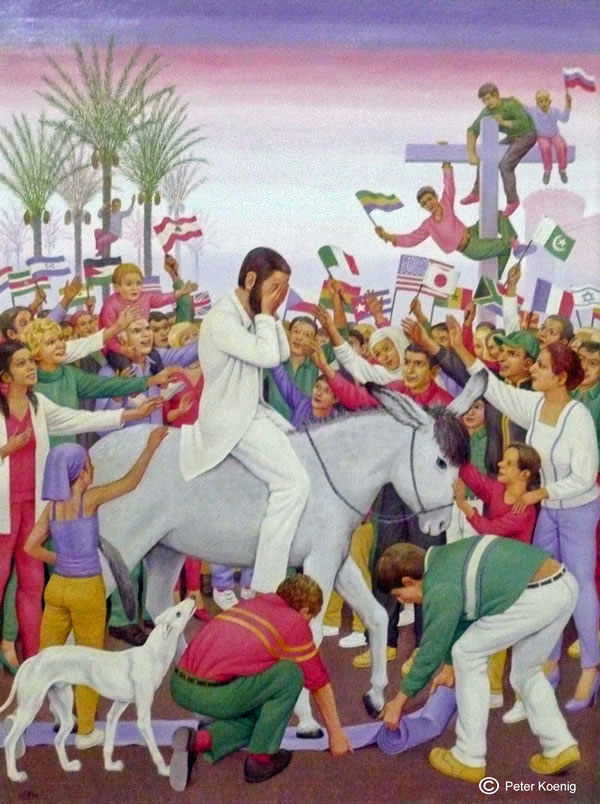 The moment is filled with paradox. Jesus enters the royal city, proclaimed as “the blessed one who comes in the name of the Lord—even the King of Israel.” Luke says his appearance signals “peace in heaven.” As he arrives, he is keenly aware that tremendous confusion lies at the heart of the recognition he is receiving. And Peter Koenig’s painting captures this nicely.

Koenig portrays Jesus dressed completely in white, suggesting his identity as ‘pure victim’ and ‘true priest.’ The painter takes a symbolic approach to the scene, envisioning it in a contemporary setting. Though we see an ample supply of date palms in the background, people in the crowd are waving flags. I count at least 18 communities or nations represented by those flags, including Israel, Lebanon and the Gaza Strip, as well as Nicaragua and Cuba. Surely , a crowd of people from many nations, united in their enthusiasm about Jesus’ arrival, is a sign of hope, is it not? Why would he be weeping?

He is weeping because he knows what is in people’s hearts. He knows how thin is our perception, and how halting is our embrace of him. We so often assume that, by virtue of our common affirmations, we can overcome our divisions. As if we could all agree upon a combination of human civil laws, and then arrive at the unity we all desire. But he knows that the healing of the divisions between the nations will not occur until the real human problem has been dealt with. The real problem is sin. It will be dealt with by his cross and resurrection, and most importantly, by the descent of the Spirit at Pentecost. Only these events will heal the divisions we have experienced since the demolition of the tower of Babel.

We see two figures in foreground unroll a band of penitentially-colored purple fabric. They discern a more appropriate way to greet him, than do those who wave symbols of the partitions between us. We so often behave as if we were less than the one people of God. Yet, the Body of Christ replaces all our competing affiliations, a fact not yet apparent to those who shout Hosanna on this day. This same heedlessness is suggested by Koenig’s portrayal of those who seek to greet him by climbing up on a cross. Soon, they will lift him up on this same form, confirming their need for him to be among them. If he weeps on this day, he weeps for us. We are among those for whom he asks forgiveness, for we know not what we do.

Peter Koenig, Entry into Jerusalem. To view more of his paintings, click here. See Mark 11:1-10, and John 12:12-19. To access my Palm Sunday homily, on which the above is based, click here.