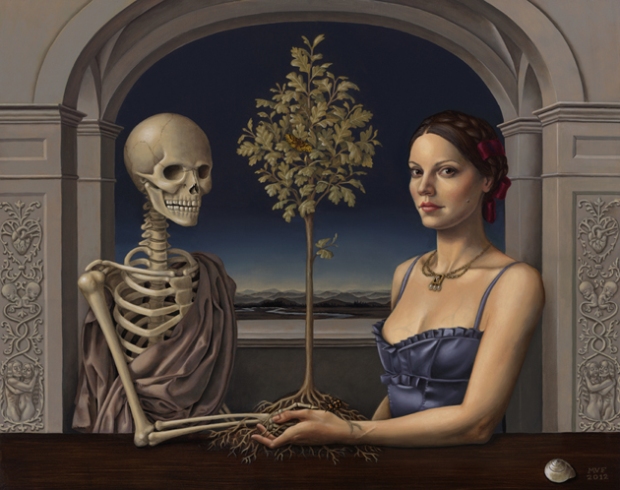 She looks out at us from the painting with a relaxed gaze. Her posture communicates calm assurance. But, look at her eyes! They suggest critical attentiveness. The painting’s composition and its egg tempura method reflect an artistic tradition going back hundreds of years. And yet, the subject matter and choice of imagery are thoroughly modern. Though relatively young, Madeline von Foerster’s portfolio displays significant scope and reflects serious engagement with the history of European painting. Equally evident is her abiding concern for the natural world and our relationship with it. You might just be able to see her careful depiction of two endangered species, the Oregon Silverspot Butterfly on the oak tree, and the American Burying Beetle crawling on its roots.

She observes that, “the first promise inherent in the image is the certainty of death,” an idea that initially may strike us as negative. However, she says, “my painting is meant to present a different concept — that of a collaboration with this part of the life cycle, since death is the opportunity for our atoms to rejoin the soil and become new life forms, as they have done countless times before becoming us.  A long held wish of mine is to be buried under a young oak tree, so that as the tree grew, it would literally acquire my atoms.  For me, this seems a sacred privilege which hints at immortality.” To the artist, then, the oak tree represents “a more significant promise” than that of death.

This painting expresses a worldview in continuity with one we discern in much of Scripture. Except for one significant point. Texts like Genesis 1 and John 1 are permeated by a conscious awareness of the Creator’s continuing presence in Creation. Though Madeline von Foerster does not explicitly claim this same awareness, something not far from it is implicit in her work. As we know, nature mediates grace. In this painting, she does not portray a covenant with death, as some might suppose. She portrays a covenant with life, in the face of death. The painter recognizes the theme of promise as implicit in the patterns of nature. Though she doesn’t credit a higher source for it, she can help us see that source even if it’s not her conscious intent.

Madeline von Foerster recognizes how purpose and meaning are intimately bound up with the waves and particles that make up the universe. She marvels at how bits of our physical embodiment have a deep connection with the stuff of Nature, and her comments echo statements made by scientists. People who identify with the Church’s faith would agree, but want to say more. Those same atoms within us have a destiny that includes but also transcends becoming part of other biological life forms. Within us, these atoms have a vocation to be bound up with the spirit of the living God. The promise at the heart of the universe is both spiritual and material, as Teilhard de Chardin spend much of his life working to show.

Promise is therefore more than something implicit in nature. Promise shapes the Creator’s activity.

Madeline von Foerster, The Promise II, 2012 / (C)Madeline von Foerster http://www.madelinevonfoerster.com (used with permission). The longer quote in the second paragraph is from an email sent by the painter, and the shorter one is quoted in an interview that appeared in MenacingHedge.com.

This reflection is adapted from my homily for Lent 2 (click here for a link).